The recent tragic murder-suicide committed by Kansas City chiefs Linebacker Javon Belcher is a wakeup call to a lot of people that worship at the temple of entertainment and who sees athletes as card board cut-outs to be denigrated when they don’t excite them, but praised as gods when they do. We tend to ignore that fan is short for fanatic and is defined as “A person filled with excessive and single-minded zeal, esp. for an extreme religious or political cause”.

Many of these fanatics live vicariously through their favorite teams or players and become quite emotional at every win, loss, mistakes or slight, which is taken personally by these fanatics. Witness the Lebron James mess, or the Michael Vick fiasco that is still throwing around with hatred by the people who really lack life coping skills. Sports as one aspect of entertainment, is also something that reinforces every ethnic stereotype and hatred ingrained into people through socialization and reinforced by the media. Is there any other explanation when one considers that the average young athlete stands a better chance of being a Dr., engineer or scientists than of making a NBA or NFL team? Yet socioeconomics, classism and dogma pushes low income males and females to over pursue this field instead of a less lucrative profession (in the short term) over one that strokes their egos and gives them a false sense of importance relative to this materialistic society. And they get paid a high amount of money to boot.

I have often read comments where an African athlete would speak on something relevant or related to something outside of running and catching, dodging and jumping, only to be told to shut up and play. Many athletes by the very nature of their profession are under an extreme amount of pressure to succeed and remain relevant. This is one of the reasons why after the lights have dimmed many led self destructive after sports lives. Hell many lead such a life during their careers, which are not that long compared to a regular profession.  Women and men love athletes. They are the fittest of the fittest, the most masculine and the epitome of feminine strength. Everybody wants to get with an athlete, fuck them, get their money, share their fame and generally are in heaven when any of the previous has ever been accomplished.

Few people look behind the cardboard cut-outs of the athletes and see a human being. People cannot comprehend how Ray Carruth could do what he did to his pregnant girlfriend. Nor what Tommy Kane did to his ex-wife. There are numerous other tragedies affecting athletes around the world.  Not just African athletes, though the narratives seems to target us more than any others. What can you say to a man who would kill his woman or the mother of his child? People do so all the time. Women kill their boyfriends and husbands, but the average fanatics believe that an athlete should be above this, which is bullshit and places an unnecessary burden on them…as if being a professional athlete is not burdensome as it is.  This latest incident is not an indication of an African male murdering his child’s mother and then killing himself. This is not an indictment of an athlete doing wrong. This is an indictment on Western Culture that places unrealistic emphasis on the illusion of fame over quality of character across all aspects of society. You see the same in politics and the other aspects of entertainment. Yet this type of tragedy crops up once too many times and people just pause for a moment of silence…and then cheer on their favorite team to “kill” those other bums.

Everybody will have an opinion as to why Javon Belcher killed 22-year-old Kasandra M. Perkins, leaving behind a young baby, two distraught families and friends and associates who will forever be in the dark about this.

There is something foul in Western culture that something like this and others much worse has become routine and the norm instead of an aberration. We should each reflect on our own lives and what we teach our children. We should really consider how we live our lives and while we can’t change the world, we can each take steps to create a movement where violence-even self inflicted won’t be an answer to the things that stress us out. 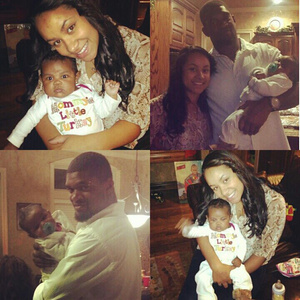 2 thoughts on “When the fantasy of sports meets real life.”