August 3, I shared a video on my Facebook page, stating how curious i was regarding the Brazil Olympics being attended by black people, some from some of the more repressive regimes in the world. amurdikkka included. I also stated that….

“Considering all that has happened in Brazil, just this year. Do these black Olympic athletes care about what is happening to the poor, much less those poor and black? I was never a big fan of that event that tends to bankrupt poor countries, but is the pursuit of medals, glory and pride for shucking and jiving for white pathology supersede your hue-manity?”

It remains quite instructive, how the jingoism of national flag raising and national pride erupts in the hearts of the descendants and people of the neo-colonial Caribbean islands and neo-plantation amurdikkka plantation. The craziness culminated in the hair terrorism on Gabby Douglass….four years running….and the hate against Shonda Williams for falling down at the line in the 400 meters, or the question of Usain Bolt being drug addled in a race where Justin Gatlin and Tyson Gay…to name a few.

Now I only mentioned those two men, not to bash them, but to show how misplaced nationalism can cause otherwise thinking people to act as mindless automatons for European bread and circus events. Every kneegrow from a European run country, which means on the planet, will practice a form of Stockholm Syndrome flexing for their respective plantation over another plantation. After asking the question on Facebook, a brother reminded me that these kneegrows don’t care because they getting paid.

This in the third level of the three points of our enslavement and self destruction as Afrikan people. The first being reLIEgion and the second being edumacation.

Every Olympic games, the “wickedly wise” operators of white pathology, reminds us “how far we have come” from the turbulence of the 1960’s and the iconic image of Tommie Smith and John Carlos raising their fists after wining medals at the 1968 Olympics. The narrative was that they were protesting for “equality and civil rights”.

Unknown or barely reported was also how the men’s 4×400 metres relay team winners from the United States, also celebrate their victory during the 1968 Summer Olympic Games in Mexico City,similarly to Carlos and Smith, sans the black gloves. The modern amurdikkklan athletes are afraid to lose endorsements for making international protest like these men. In fact men like these are a dying if not dead breed, where dignity triumphs over dollars. This is why Muhammad Ali was called the greatest by others than himself. Not because of his boxing acumen, but because he stepped off the sporting stage for a principled stance.  The modern north amurdikkklan and Caribbean athletes have houses, the are paying mortgage for, on lands they are paying the “king” for (real estate property tax), a job they slave at to give away half their sweat equity back to a terrorist entity in the form of federal taxes and entertainment of a wide variety.

This is the equality and civil rights that the modern western athletes primerely from the Caribbean and amurdikkka embrace and worship. So when athletes like Feyisa Lilesa, Olympic marathon silver medalist, decided to protest, not direct white pathology and neo colonialism, but indirect white pathology in the form of fratricidal genocidal attacks on the original black people of Ethiopia, the concerns about whether Gabby Douglass hair, Alison Felix’s excellence or Usain Bolts legendary status is more compelling, pales in comparison to what is still happening to Afrikan people in Brazil, in Europe and in Afrika. 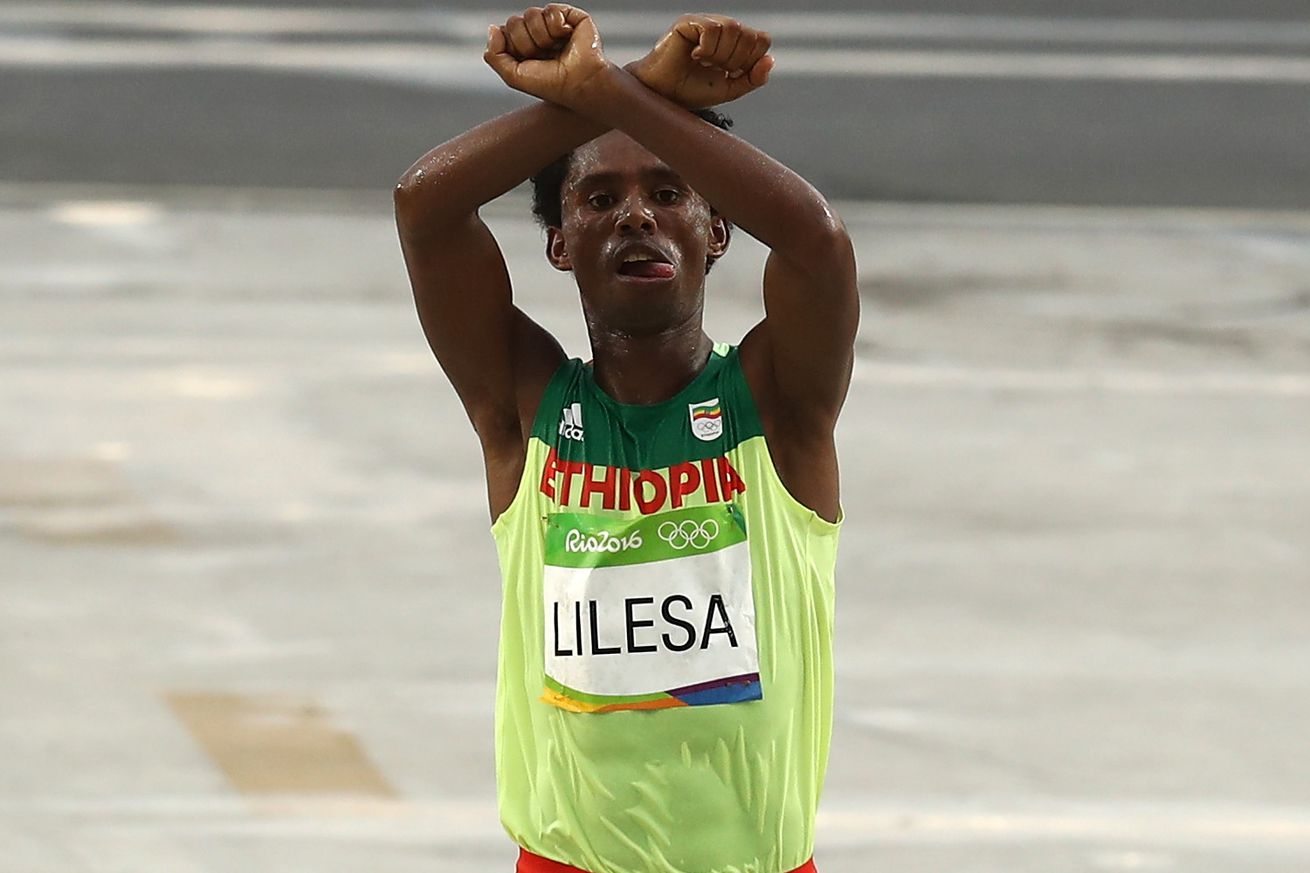 Lilesa’s simple act of making an “X” with his arms after winning an Olympic medal was a watershed moment for so many of the Oromo people of Ethiopia. Whether at home or abroad.

This young brother is currently still in Brazil, fearing to go back to Ethiopia, where he or his family may be killed, by a government of bent on eliminating the original people through “urban expansion” and other stringent actions. These are the same sect that many uninformed foreigners claim are the representation of Ethiopian people. This is all we overstand because the tribe that brought forth Haile Selassie, are the ones currently promoting themselves as the original people.

The Amhara ethnic people are the dominant group, briefly interrupted by the Derge ethnic group, during the socialist reign of Haile Mengistu Mariam. However the Oromo are an ancient sect and has been fighting government terrorism for a very long time.

representative of the Amhara ethnic group

representative of the Oromo ethnic group

The current government in Ethiopia, like any others in Afrika, except for Maybe….maybe the Mugabe government in Zimbabwe, all have European and amurdikkklan hands in their pockets and natural resources. The white man…and that’s who it is…the white man supports, arm and instigate ethnic unrest in order to put in place favorable governments that will cow tow to their national interests. All those places have resources the white man needs, without witch Eurasia would go back to the dark ages. Many of those places have oil, diamonds, coltan and uranium. Alcoa needs tin and bauxite and copper. Halliburton and many similar country corporations strongly desire to get in there to enrich themselves. In fact many private jails are trying to get into Afrika and the Caribbean to run those country’s jails.

Sports and entertainment are a path that some countries, like Lebanon and Palestine sought to enter, but really to highlight the oppression they experience under the terrorists in Is-It-Real! You even have a contingent of displaced athletes calling themselves refugees, going to Rio to highlights the plight of refugees like themselves from places on the planet oppressed under white pathology.

Unfortunately efforts like those at the 1968 Olympics and of the refugee athletes, are sadly already forgotten, because we don’t control the media or a media of our own. Nor do we have a strategic long term plan to over throw white pathology. Thus international athletes will conveniently forget or ignore the over all plight of Afrikan people, whether in Brazil, the Kongo, South Sudan, Kenya, Is-It-Real, Libya or any urban area in amurdikkka. For the love of money and fame, the kneegrow grows rich, famous and fat off the largess of colonialism and white violence, as long as they are assured by their Khazar agents that they are “different” than those “others”.

Don’t worry though, the killings, beatings, maiming and media terrorism will continue, only interrupted by the NCAA college bowls, the final four, the NFL play offs and the NBA playoffs. The violence and terrorism against Afrikan people will continue until the world cup, the commonwealth games and which ever boxing or UFC matches are on tel-lie-vision. The quaintness of the 1968 so called “black power” fist up, will just be that. A quaint symbol of a by gone times. How far we have come indeed!

How much more can we take? How much are we willing to give up?