This is the image of the latest and so called hottest rapper in the game. Some of you kneegrows favorite entertainers, support, suck up to and enthusiastically endorses this lesbian, pornographic, foul mouth wanna be dick slinging piece of trash. Yet these same entertainers AND many of you kneegrows shit on Young Thug and those other suspect or out and out faggot rappers and entertainers. Why is this so? Because among kneegrows it is acceptable to be a lesbian, even one trying hard to be man looking, over a male homosexual, who is not even trying to look feminine.

This kneegrow T.I totally went ham on boxer Floyd Mayweather, who not only claimed that All Lives Matter, but implied that he loves everybody. Was he really upset at Floyd’s statement, or was he upset that two years ago Floyd almost beat his ass for running up to him, as he Floyd was in a restaurant with his very interesting looking wife?

This is what passes for musical role model these days. What in the name of Lord of the Rings is happening here?

We have become a sick people. Much sicker now than all the years we spent toiling under the whips and barbarism of white savagery, during the days of the plantation. We have lost our damn minds, our souls and we have also lost many of the generation of youth who right now is experiencing a rate of STD’s unprecedented even during the free love era of the 1960’s.

I fell like the fictional Noah and am asking myself is it worth it to continue to warn kneegrows of the coming flood. This flood will be in the form of internment camps, forced prison incarcerations and labour and organ thefts. I am building my figurative arc while keeping one eye on the coming flood and the other on some of you kneegrows. 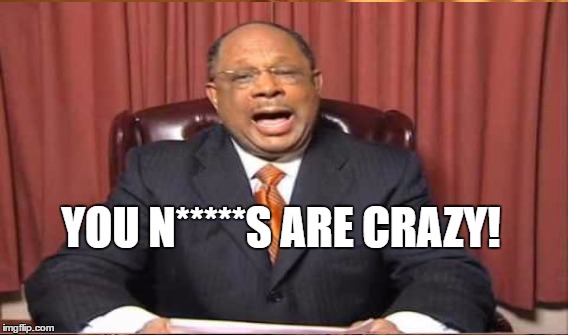