A revolution is a struggle to the death between the future and the past. They talk about the failure of socialism but where is the success of capitalism in Africa, Asia and Latin America? I find capitalism repugnant. It is filthy, it is gross, it is alienating… because it causes war, hypocrisy and competition.

Last night I was explaining to my eastern European co-worker, exactly why white folks in amurdikkka will get their own kkkraka wake up call, when the candidate they proudly voted for to bring back jobs to the country won’t do it. I patently explained why his self aggrandizing speech about working over time to get Carrier A.C ., to change their minds about leaving for India is just smoke blowing up white people and many kneegrows ass hole. Patiently explaining how slave labour abroad and tax break at home is what drives big business today, I referenced the short interest of the Duty free tax zone in Jamaica and how the Chinese used it to exploit the labour force there and how they had to leave under the cover of darkness, when the abuse and profiling really culminated when the fired all the native Jamaicans and attempted to bring in Chinese workers from the U.S.
Somewhere in the lecture, I mentioned how the IMF, World Bank and Amurdikkka, specifically worked to screw up the Jamaican economy after the election of the Socialist leaning Michael Manley. How Manley after being rebuffed and pimped by the IMF, turned to Cuba for ideas and support in growing his economy with minimal help. This started the spiral of gun violence orchestrated by the CIA and the Opposition at the time, the Jamaican Labour Party. It was some what interesting that as I spoke on Cuba and that countries support of Jamaica, including training nurses, doctors and other skilled professionals, I read that Fidel Castro made his transition.

Just before his death. Days earlier. Sports article came out about how some supposed Miami Cuban savage, assailed Colin Kaepernick about his shirt with the image of Fidel Castro and Malcolm X meeting in Harlem, just before the United Snakes, effectively shut down the economy and the society for over 50 years. 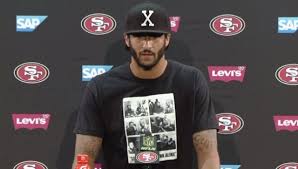 Eschewing so called unbiased Journalism, the savage went in unprepared and got his cave monkey ass handed to him. Albeit in a much nicer way than most would have. The white dude, was claiming that Castro is a dictator and Colin Kaepernick was supporting the Dictator. The same Colin Kaepernick getting shitted upon by almost every walking breathing knuckle draggers and cowards in the country. People also wishing him harm and wanting to directly harm him. Because he was objecting to the dictatorial violence committed against black men in the land of the trees and home of the slaves.
Lost in all the ado about nothing, was the fact that Kaepernick was actually wearing the shirt in respect for EL Hajj Malik Al Shabazz…Malcolm X and his ability to be open to different ideas, as long as it moves black liberation forward. But then, the amurdikkka idiot citizens, raised on the kool aid of amurdikkka being the bastion of democracy and freedom, will always believe that Fidel Castro will go down as one of the most evil men in his-story. So what about ourstory? How do many of us view Fidel Castro?
Well with the exception of the regular kneegrows who will believe anything the white man says, most of the black people who opposed the legacy of Fidel Castro fall into three categories. There is of course the kneegrow capitalists, then the black Cubans who claim racism  and the minority of Somalis who claimed Cuba sided with Ethiopia in their border wars.
I have not delved into the Somali-Ethiopian border clash, though I knew Ethiopia always had imperialist intention in that region. But That current government was Socialist though. And Somali was a clearly Islamic state. So the rantings of Somali’s who are more Islamic and Afrikan, should be taken with a grain of salt. Plus they way the Somali state is now, I am not sure Islam has done them any good. The kneegrow capitalist is pretty clear where their allegiance lies, but it is the black Cubans, whose voices I would listen to more and scrutinize more than the others.
For every one of those, are numerous others who’s objection to socialist Cuba, was more about economic opportunities than racism. Although poverty can and does bring out the worst in people. But don’t you think its odd that many of the Afrikan Cuban who defected….run a away from Cuba..are Athletes. Don’t you think its interesting that as soon as they make it outside, some sports team scoops them up to be their bitches and prostitutes?

Supporters of Castro points to the numerous occasions he intervened on behalf of Afrikan countries fighting against oppression, giving support to areas affected by ecological disasters and in peace time, by supplying free medical and educational training to anybody that asked. Cuban soldiers and professionals repeatedly placed their lives on the line in defense of Afrikan countries and as examples of their socialist ideology, which states one must fight injustice everywhere.

“We (Cubans) are a Latin African nation. African blood flows freely through our veins. Many of our ancestors came as slaves from Africa to this land. As slaves they struggled a great deal. They fought as members of the Liberating Army of Cuba. We’re brothers and sisters of the people of Africa and we’re ready to fight on their behalf! ” – Fidel Castro “If you are unsure of a course of action, do not attempt it. Your doubts and hesitations will infect your execution. Timidity is dangerous: Better to enter with boldness. Any mistakes you commit through audacity are easily corrected with more audacity. Everyone admires the bold; no one honors the timid.”

Do not accept the roles that society foists on you. Re-create yourself by forging a new identity, one that commands attention and never bores the audience. Be the master of your own image rather than letting others define if for you. Incorporate dramatic devices into your public gestures and actions – your power will be enhanced and your character will seem larger than life.”

“Be wary of friends—they will betray you more quickly, for they are easily aroused to envy. They also become spoiled and tyrannical. But hire a former enemy and he will be more loyal than a friend, because he has more to prove. In fact, you have more to fear from friends than from enemies. If you have no enemies, find a way to make them.”

“Few are born bold. Even Napoleon had to cultivate the habit on the battlefield, where he knew it was a matter of life and death. In social settings he was awkward and timid, but he overcame this and practice boldness in every part of his life because he saw its tremendous power, how it could literally enlarge a man(even one who, like Napoleon, was in fact conspicuously small)”.