The current situation in Jamaica, which started out in one isolated area, has now spread all over the Island. It is now left the Island nation in a state of emergency. Apparently women and girls between 3-40 are said to be brutally murdered, dismembered, mutilated, chopped up and left off the side of the road in some bushy area. Their organs were removed and sold on the illegal organ harvesting market.

I am typing this from a computer that won’t let me download videos, but If you go to War on the Horizon…Irritated Genie’s site, you will see a video of a woman’s body displayed in all its grotesqueness’, missing all of her organs. You can even hear some dude in the voice over talking about how wicked the perpetrators were for cutting up the body so severely and stealing her organs,

The Chinese were given legal entitlement to start building a state hospital in Jamaica, in the region of Montego Bay, and interestingly, this is where the first women were murdered about 2 weeks ago. The agreement was signed on January 9th and 2 weeks later, the murdering of these women and children began and has not stopped since then.

From what I am hearing, this has been going on in Haiti for a while now. But since the US has placed Haiti under a media black out, due to so many amurdikkklan political and corporate involvement in Haiti’s burgeoning gold and oil discoveries, the organ thefts in Haiti is mistaken for the regular H.A.R.P induced and amurdikkklan orchestrated genocide of the Haitian people.

The idea of consuming the organs or corps of an enemy is a very old concept and while it does not have an history in Afrika, based on the lack of evidence, documentation, up to a certain period. Cannibalism, despite the racist rewriting of ourstory is a well documented narrative of Europe and has taken on a similar profile in Asia.

You may have read or heard story of deprivation, that caused people to consume human flesh or starve…i.e. the pilgrim, who dug up their dead and ate them after experiencing their first winter on Turtle Island. But there are precedents in European history of warriors consuming the hearts and brains of their enemies to steal whatever “powers”, one thought he enemy had. The book below is a compilation of actual stories and evidence that cannibalism was a very real happening in Europe. And not necessarily due to deprivation. Unless you are talking deprivation of the soul.

One thing we are rarely taught at school is this: James I refused corpse medicine; Charles II made his own corpse medicine; and Charles I was made into corpse medicine. Ranging from the execution scaffolds of Germany and Scandinavia, through the courts and laboratories of Italy, France and Britain, to the battlefields of Holland and Ireland, and on to the tribal man-eating of the Americas, Mummies, Cannibals and Vampires argues that the real cannibals were in fact the Europeans. Medicinal cannibalism utilised the formidable weight of European science, publishing, trade networks and educated theory. For many, it was also an emphatically Christian phenomenon. And, whilst corpse medicine has sometimes been presented as a medieval therapy, it was at its height during the social and scientific revolutions of early-modern Britain. It survived well into the eighteenth century, and among the poor it lingered stubbornly on into the time of Queen Victoria. This innovative book brings to life a little known and often disturbing part of human history”

The Arabs also have a narrative around eating the heart to their enemies. Maybe a few of you may have recalled George Bush’s invasion of Iraq and how it created the rise of a western/ Israel coalition of killers pretending to be Muslims, fighting against remnants of Saddam Hussein’s soldiers. I watched a video where on guy punched a knife into a dead soldiers heart and cut out his heart, bit into it and held it up for those around him to see. This was captured on video. The consumption of body parts is why the Ivory and Shark Fin phenomena is such a big one in Asia. From eating dogs, dolphins, shark fins, grounded up elephant and rhino tusk, to eating bear balls, and bull balls for virility, the search for these so called exotic entrée has been going on for centuries.
Numerous times over the last couple of years warehouses have been raided by the FBI and other agencies in amurdikkka where enclave of Khazars are arrested for trafficking in illegal organs. But it is China, who are not constrained by Christian religion, who unabashedly consume aborted fetuses in soups and other dishes. For the longest while the idea that aborted fetuses, which produces stem cells were sought after by  wealthy people. This while organ theft and transplant has gone on for a long period. And one of the best ways to hide organ trafficking is at the morgue, or by abortion clinics.
Planned Parenthood kept aborted babies alive to harvest organs, ex-technician says
Other means of stealing organs directly through the murder of black people.
Illegally Harvested Body Organs & Missing Black People
Selling Black Children Organs | AfricanAmerica.org
Atlanta Man Found Dead And Missing Organs In California
Are Black People’s Organs Being Stolen For Profit? | Kulture Kritic
We now live in a time where cannibalism as a part of some satanic ritual is at its heights. The one thing you could say about the fundamentalism of Christianinsanty in the west is that it once kept a tight reign on reLIEgious competition from the Satanist and followers of Kabbala practices. Now thanks to liberalism, a media bought and kept like cheap two dollar whores, and the willing ignorance of many in society; organ theft does not appear as horrific as it was before in some instances. While in other it is just as celebrated and embraced. 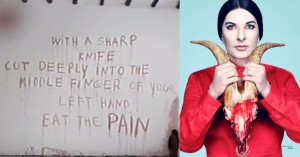 Marina Abramovic  hosts “Spirit Cooking” dinners which are attended by the US political elite, including the Podesta brothers of the Pizza gate pedophilia ring, fame. She is well connected and has a bevy of wealthy heavy weights that attend her ritualistic dinners.

It is in this atmosphere that black people the world over are going missing (64, 000 women and 1.5, 000, 000 men in amurdikkka alone). of recently many are discovered with their organs missing. The difference being the reportage in amurdikkka as opposed to Jamaica, is that neither the government nor the news media are as sophisticated in covering up the murders. Family we are at war. There is a new front to this war and we have to be even more vigilant because the enemies have exercised all option in eliminating us. But we are not prepared for this, because the Grammys have just finished and the Oscars are coming up.

5 thoughts on “The story of organ theft”