This headline is so very instructive. But most will miss the significance. A majority of people, myself included, wondered why Robert Mugabe stayed on till he was 92 years old and did not groom a successor. But apparently he was sort of grooming one in his wife Grace. Now according to news out of Zimbabwe and of course non Afrikan news source, Grace Mugabe made a power move to unseat the vice president, Emmerson Mnangagwa as the power in waiting.

The anti Mugabe factions claimed that Mugabe was a land thief. A practitioner of nepotism. A bad ruler and stayed in power too long. As a point of interest, nobody says that Queen Elizabitch has stayed on too long or will eventually have one of her family member succeed her when she eventually dies.

Those who love that reptilian bitch, will probably claim she is royalty and ignore the massive amount of properties she owns in England and around the world. They will also ignore the fact that the simple brutish subjects foot the bill for this welfare having, Germanic kkklan.

Yes! The anti Mugabe faction will focus on how old he was before retiring, so they instead are ok with having a 71-year-old man, who has been in lock step with Mugabe when all these lands were “stolen” and given to his “cronies” in the army.

Ahhh! The military. The head of the military is 61 years old and has political aspirations himself. A former “crony” of both Mugabe and Emmerson Mnanagagwa,  Constantine Chiwenga,  allegedly went to China to speak on the Prime Minister. To speak on or for? If to speak on, wouldnt that be tantamount to plotting a coupé with a foreign entity? 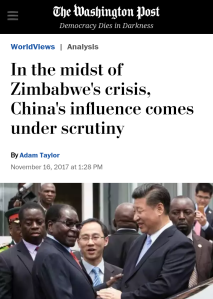 As Mugabe’s international isolation grew over the years, he increasingly looked to China for help. In 2003, Zimbabwe launched its “Look East” policy that sought to find new international partners after relations with Europe soured. China soon came to dominate the policy. Between 2010 and 2015, China granted Zimbabwe over $1 billion in low-interest loans, and Zimbabwe reciprocated by making the Chinese yuan an official currency.

Keep in mind Mugabe was isolated by white governments and derided by their kneegrow lawn jockeys because he wanted to take back stolen lands from the invaders from Europe and the Brutish empire. Those same savages in Europe, reneged on a promise to compensate the invaders for the stolen land that were taken back. Then they turned around and claimed Mugabe stole from them and that the people who farmed those very land, as indentured workers, that the savages owned, would not be able to make the land fruitful.

Now to compound this fuckery, white people…the savages from the caves and sewers of those cuntries ( yeah i spelled it right) decided to place economic embargoes against Zimbabwe and stole governments monies that were in bank accounts outside of Zimbabwe.

This is where those with short memories, who should be on the short bus with a helmet on, decided that Mugabe fucked up the economy. Kneegrows in Zimbabwe witnessed lycans of the invaders dancing in the street as Mugabe was placed under house arrest. Later these same fools were dancing with the children of te invaders after Mugabe tended his resignation.

To quote the Egungun, Dr. Khalid Muhammad…”you people make me sick to my stomach!” I heard one lady on the radio claimed Zimbabwe had the most educated population on the continent. They owned their own resources, mines and industry. All you could ask for from a sovereign state. Yet the woman said they needed “jobs”.🤔🤔🤔🤔

One of my personal example of Afrikan leadership…Thomas Sankara…lifted up Bourkina Faso from a colonial entity to a land of upright men in three and one half years. Where the people could take care of themselves.  Sankara urged other Afrikan nations to trade with each other to avoid dependency on Europeans. Many refused because their collective mouth were inside the kitchen European market. And as Thomas Sankara stated, you can be colonized from your plate.

So now we see Zimbabwe, the most educated nation in Afrika. Zimbabwe a country that owns its resources. Oust the leader who made this possible, by accusing him of being too old and corrupt and substituted him for an interim leader who is also way past his prime, but who is in favor of the people and the army, commanded by another old fart that wants political power. All of this happens less than a month after Mugabe was on the verge of making one of the mines, one hundred percent Government owned. Kicking out some of the last vestiges of invader involvement in the government enterprise.

Now here comes Theresa May of England….a bitch that lost majority power in her own government, offering to help “ease” the transition from Mugabe to the next leader. Maybe Grace Mugabe saw things that her husband couldn’t see because of his friendship to his former freedom fighter buddies. Maybe her power moves were designed to get around the personal ambitious manuevers  of men who would placed Zimbabwe in foreign hands. It appears it has ended up that way anyway.

As men many of us like to state that women can be overly emotional most times. But isn’t that very emotionalism that allows them to feel and connect in a way that men can not or will not?

Afrikan are dancing in the streets with illegal aliens who are the children of the settler colonialists and other refugees from European impoverishment. Watch and learn people, all that Mugabe has accomplished will be destroyed in ten years. And them dancing kneegrows will act like it was not because they were looking for a quick fix to Western embargo, by bending over for the west. They see Mnanagagwa and Chiwenga as saviors. I se them as cats paws for neo colonialism of a place once called Rhodesia.