The latest useless brouhaha around Genuwine and his stooped ass for getting caught up in a bizarre social experiment which resulted in some transformer trying to put his dick sucking lips on the entertainer, is the latest in a long line of agenda driven program to eliminate the black male as an image if manliness and masculinity.

However the savages realized that the more you brutalised a people the more they get resentful and will fight back. Especially if they feel their backs are up against a wall. Enter the psychological warfare of a different kind.

Yet despite these conditioning, pockets of men like Marcus Garvey, Martin Delano,  Nat Turner, Gabriel Prosser,  Malcolm X, Khalid Muhammad, Mark Essex, Fred Hampton and many in the Black Panther movement…to name a few, came out determined and divinely moved to exert their manliness and masculinity by any means necessary.

By any means necessary.

However each generation were worn down by the propaganda of race soldier brutality and murder. By pitting the black woman against the black man, through welfare, miseducation, low employment of black males, attacking his already fragile psychic by getting him to turn his fury against his mirror self and his woman started to wear away at the black man’s sense of direction.

The coupé de grass was the so-called sexual revolution where the kneegrow academics, the folly tricksters and the entertainers coupled with institutional rapes and molestation of black boys created a new kind of socialization of not only emasculating the black males, but to effeminize him.

Effeminizing the black males was and is the ultimate victory of the savage against black masculinity.  It has done more to demoralise us and pit our woman against us than, slavery, Jim Crow,  police murder, the prison industrial complex ( which is a major part of the effeminization) and race mixing.

By Effeminizing the black man, black women and children cannot find a masculine man as far as the eyes can see. And if one happens to drop it of the sky, we have been so conditioned to fear him, that we either betray him to the savage, attack him for his “difference”, or try to change, shame or diminish who he is.

In 2018 a strong muscular black man can put on a dress, panties and a wig and be celebrated as a real man. But a man…even a scrawny pencil neck geek, can say he loves only black woman and is destroyed by the savages and numerous kneegrows for not being manly.

In this day and age, fucking a man is considered a sign of progress. Marrying or choosing an authentic black woman is odd and disturbing. What is disturbing is WE ARE LEADING THAT CHARGE! 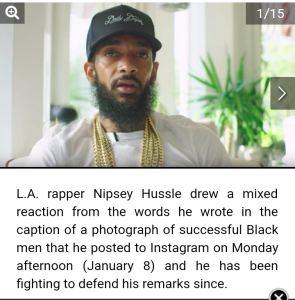 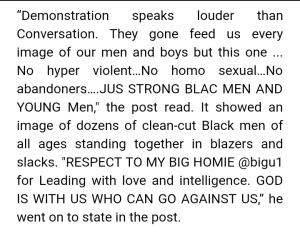 the following screen shot is a snippet of the nonsense masculine males have to go through in trying to celebrate any semblance of manliness under white pathology. I know I am beating a dead horse, but I must admit that one of the issues with Dr. Umar’s attempt at purchasing a school, and the resistance against his efforts, wasn’t because of the school itself,  but what type of school. It was an all boys  school.

Many of us forgot that the original outrage was because he wanted a school for Boys.  Yet Oprah could go all the way to South Africa to build an all girls school, where rampant lesbianism actually shut the school down. But Oprah is still celebrated today for her philanthropy and…as one ignorant fool stated…does more to help humanity than any one else.

I remember watching a particular show of hers in the 80s, after she toppled Phil Donate as the top talk show host in Chicago, a black man was brought on her show to be humiliated and abused by this Aunt Jemima acting bed wench. His crime?

Running an all boys camp for delinquent teens. There were trumped up charges of physical and sexual abuse by him of the boys and even though he was eventual and quietly cleared of the accusation. A show like Oprah helped the nation to attack him, the idea of manhood training for Boys who needed it and black manhood in general.

This came at a time when white men were having boot camp manhood training for little white boys, that echoed the military’s own basic training.many of these white  boys were brutalised by their camp counselors.  And the main result were the quiet shutting down of the ventures. Barely any public outrage and maybe one or two arrests.

The screen shot with Nipsey Hussle is even more disturbing than the Genuwine saga, because he was praising the image of black manhood that didn’t portray any faggots, transformers or any other weird mixture of sexual maladaptation that has infected the homes and lives of black people.

In fact the narrative from the site I took the screen shot from had many kneegrows calling Nipsey Hussle a pussy and a coward, because some MMA trained person (not sure if it was a savage or a kneegrow) challenged him to a televised fight. With referees and shit. In declining such a spectacle Hussle was accused of being unmanly.

James Baldwin…a dyed in the wool white sex offender…always knew to separate his love for mens anus, from his hatred of white brutalisation of black people. He made a quote that I always use that went like this….”when the white man comes against me, it makes me stronger; but when black people come against me, it tears me down”.

This is what happens when kneegrows attack against black man for (a) wanting ONLY black woman as a sexual preference  (b) wanting any woman, in fact, over a lab experiment. The kneegrow females seem to love conuddling with fags and transformers then turn around and ask where the real men at. The kneegrow male, many who are under cover fags themselves, will support those kneegrow females in their madness, hoping to get some pussy or a promise of some pussy, because they aren’t all that ready to go the last 10 yard into fag dumb.

Homophobia seems to be the catch phrase for a man who refuse to play the lab experiment game. Yet no body practice more phobia like the homosexuals and the promosexuals. Heterophobia. ..the fear of losing the battle for the minds of black women and children to real and authentic masculinity.

This is my stance. I will stick to this even if you lock me in a room for 48 hours and have me listen to Cardi B and Niki Menage tramp’s whatever the industry styles as”music”, with a side order of mumble rap. I would rather embrace my ears bleeding and my brain cells dying from listening to that shit, than to ever embrace lab experiments as a natural part of this market place.

A word to the black males who like to side with the heterophobic crowd. If they come for me in the morning, they will come for you at night. So unless you choose to play up in men’s doo doo hole, be assured that it will be expected off you eventually.

It’s either straight black pride or death. You choose. And if you choose life, which is straight black pride,  then be the example of authentic masculinity the black woman and children misses and needs or else we will indeed be extinct as a distinct ethnic group.

13 thoughts on “The war against heterosexual men”