Regardless of which side of the debate you sit on. Theong time obsession with Kobe Bryant has escalated above and beyond its normal level. In overstanding the impact that he had to people in the society where personality worship is a religion, i choose to stand back and observe. What i saw upon observation, is on one side were unnecessary comments about his white wife, where his money will end up and how he was not “black enough” for some people. It is not possible for us to all be monolithic in thoughts and behaviour. There was even a youtube video where one kneegrow female out right celebrated his death.  To me not only was this unpleasant, but is indicative of the innate low self esteem of some black people,  including the black conscious crowd to automatically paint everybody who moves differently  as coons and sell outs. While i will acknowlwdge in private company how people like Bryant constantly remove mega wealth from black people and leave it with none black spouses. I am also congnoscent of the fact that it is his money. And just like it’s his money  or her vagina, they can do whatever they want with it. Leave it with your pet cat for all i care.  Because i already  overstand  that some people will not be part of my journey. And i am indifferent to them.

As i grow older and hopefully wiser, i have learned that not everybody will travel the same road as i. In the same  vehicle as i. And not in the same time as i. Being a somewhat obdurate person most of the time, i tend to get my hackles up when people push their ideas and notion on me. Because of this i have learned not to do the same to others.  So the well spring of commentary about Kobe’s failures at this junction seems opportunistic and akin to beating a dead horse, or vilifying a dead man.  When much of this should have been down when he was alive.  The vilification is as expected,  par for the  course with white people and feminists who keep bringing up the false rape charges,  knowing full well the white girl was a whore and had fucked five dudes previously while not washing her pussy before Bryant dipped his penis in there.  The five extra dried up semen DNA, on the underwear elicited a recanting of her accusation and eventual dismissal of the case. Something white people refuse to accept, because white people hate and despise black people fervently. And will hate us beyond the grave.

On the other side of the fence are those  who have now deified Kobe Bryant. Apparently  even beyond the deification of Micahel Jordan himself. A feat of mega cult like proportion.  It is such a feat that people have stopped talking to family  members, friends and significant other, because those dismissed did not offer the requisite genuflection to the “god” that was Kobe Bean Bryant. I prefered to say nothing since the tragedy, electing instead to point out how rediculous the worship of this man who dribbled and shot a baskeball well. And chose to stay as far as possible from making unnecessary comment about him. Some may call that hypocritical, weak or a betrayl of my alleged pro black stance. I prefer to see it as being indifferent to a man who’s very life had no impact on me, my life and world wide Afurakan revolution against white pathology. I never claimed Kobe Bryant as a black concious individual, my brother or any particularly reason for me to lose my focus. To me he was just another in a long line of black men who became rich at the behest of white men and choose to reward his handlers by staying in the lane assigned to him. I have witnessed so called pro black men and women, like Angela Davis aligned themselves with white conservatives, becoming homosexuals and feminists and shun the poor. So who is Kobe Bryant foe me to get in a tizzy about?  Kobe Bryant grew up middle class in Italy before coming back to Philadelphia for high school. I should not have to assume that he would automatically become Malcolm X at best or Joe Smoe who works in the community, at worse.

However, the cult of personality is real and i believe this more than anything is what has set some black conscious people to hit back at the things we have seen on social media. These things are so fsntically cultish, hidden behind genuine affection, that one would have to have their third eye open to process all of this.

The deification of Kobe 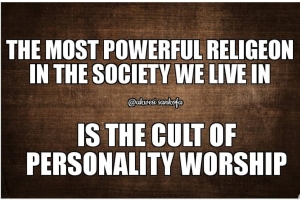 The cult of personality worship, is a phenomena, referring to the idealized, even god-like worship of the public image of an individual that is consciously shaped and molded through constant propaganda and media exposure. This image uses the techniques of mass media, such as propaganda, the big lie, spectacle, the arts, patriotism, and government organized demonstrations and rallies to create an idealized, heroic, and worshipful image of the public figure. Often through unquestioning flattery and praise. A cult of personality is similar to apotheosis, except that it is established by modern social engineering techniques, usually by the state or media which is often seen in both democratic as well as totalitarian countries. The idea of living vicariously through a media contrived and created personality infects the worshippers with a disease like compulsion to defend and fight on their behalf, even when they never met them. Anybody who even benignly question the deification of that figure is attacked. The disease is the driving force that made 800 people drink poisoned cool aid in Guyana. Or compell people commit attrocious act in their name. It is the disease that compels worshippers to attack, kidnap or stalk the object of their devotion. John Lennon and Selina are two celebrities that immediately come to mind. The cult of personality worship, causes friends and families to fall out, homes to be wrecked and lives to be forfeit. Over personalities as distant from the worshippers as the stars from the earth. The very real chance of being on some ones shit list or worse, their hit list, as a none worshipper, is the sole goal of the architects of this cult. Mass mind control is the intent. Control a people’s image, you control their thoughts and behavior. Today everything is a religious experience. Today almost everyone is in a cult. And all include the personality of an individual as the central figure. Not the person. Not their deeds. Not their character. This requires deep reflection for those on the cusp of being pulled into the mind control.

I will leave you this inspirational thoughts coming from the mouth of an Afurakan revolutionary.  And one who has done more for black people than Kobe has ever done. But one who will not get a 10th of the affection he received. And that too is alright. This journey  is not for everybody to participate in.