This meme and accompanying question, is not new, yet it has been justified for decades to blame and lump black fathers, both quality and not, as useless waste of space. By perpetrating this false dichotomy put out by the oppressors, the emotionally damaged and irresponsible kneegress and the manginas that lost their manhood a long time ago, refuse to adequately answer the following series of questions:

It gets old when a lot of people, the irresponsible female and the emasculated male to constantly make sweeping statements implying that black men, who is or was not in the child’s life, are the sole cause of the state of the black family and the state of most of the young people in today’s society. The agenda to remove the masculine male from the family unit was in place since welfare was initially used as a weapon against us in the early 1970’s. 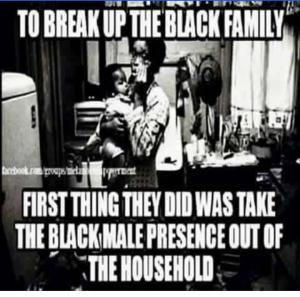 Until recently, we used to acknowledge that  welfare was the primary reason why the father was absent in a child’s life. We rarely say that anymore, because it is easier, in a matriarchal society, disguised as a patriarchy, to absolve the female from her responsibility when a child grows up to be a homosexual, pervert, criminal or some form of deviant. A lot of females, would not even attempt to surround the children (both girls and boys) with positive black masculinity. Those same ones, either surround the child with, the same types of deviants they accuse the father of being, or worse, involve a savage or two in the child’s life, particularly if the boy shows a proclivity for athletic excellence. Jim Sandusky from the Penn State scandal, is a quick cautionary and extreme tale what such an endeavor reaps. 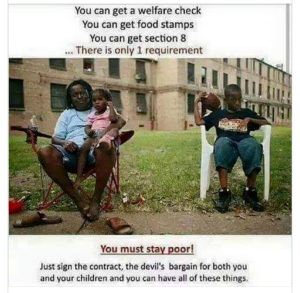 The wringing of hands and gnashing of teeth around black people killing black people is taken out of context, as per usual when it comes to us and crime. Crime is a proximity event, meaning that more whites kill whites than black. Same for East Asians, Arabs, South Asians, Native amurdikkklans and the so called Latinos. What all the ethnic groups do have in common though is that we are all victims of European savagery for hundreds of years. We allow the oppressor to define the parameter of what violence and criminality is and run with the general narrative that further oppress us to no end. After all it is absolutely criminal for a child to only hear one side of the story, which often comes from the mother and the system and her closed minded circle.

Being a sole support mother….not a single mother, because virgin birth is a myth….is a difficult position for a woman to be in. Yet under white pathology and influenced by feminazism, we today celebrate so called “single motherhood” as if it is the greatest thing since slice bread. I often see so much of these types of pictures on social media, sometimes even when there is a father evident, they still put out these type of pictures.

Watch when some blue chip athletic prospect hold a press conference to sign away his freedom on some college athletic plantation. They pathological media will focus more on the mother than the father or step-father, who are often in the same room. But they would even be happier so if there is no father at all!

Every successive occupation of a nation, increases its success at occupation, when the men are separated from their families through death or imprisonment. Once the women is in a vulnerable state, she is ripe to be “used” and co-modified by the oppressors.

This is a five year old black male child. According to his abusive mother, he is fascinated with designing clothes. I am all for maximizing a child’s interest and supporting it as far as the child takes it, without trying to impose our adult desire or interest on his/her dream. Yet this abusive mother not only encourages this little boy to make only female dresses, but she encourages him to model them, prancing and preening and sashaying in them, while giving him praises galore for it.

The above series of photos got 203 likes, 66 views and 5,993 shares. And quite a few of them in a positive nature. Here are some of the responses…

This is a picture of the boy in a store bought suite. Check out his face as opposed to the first picture up top. The black child will always seek a parent’s approval and love, so when your irresponsible parent, pushes the child to act out a cross gender scene, against his natural instinct, we have a parent shirking their responsibility to raise the child in a healthy environment. This is why I called her abusive, because she is bent on altering the child’s personality to one she feels is in line with her life style. And what is her lifestyle, you ask?  Well to find out what is her lifestyle, one just have to do some research. This is supposed to be a married woman, who is also a life coach. Below is a picture of her “husband” and another one promoting their shared coaching business. 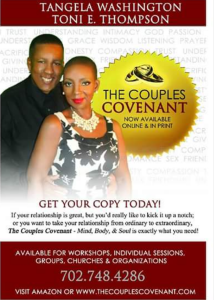 When I saw a picture of her “husband” I commented on how much of a faggot this dude looked like. Until I came across some information from some on on my friends list on stupid book (Shout out to Marc Freeman).

According to Freeman, this “husband” that the mother, whose name is Tangela Washington, is married to, is actually a bull dagger. Yep! Yep! A female, with mental and emotional impairment, who envisions herself a man. So she went and decided to cut her breasts off and who knows what else she did, to try and fool people into beLIEving that her dick is bigger than a man’s. The retarded in social media world, like to talk shit that they are adults and they can do anything the want as adults, Or they don’t care what adults do in their bedroom. However, in a world where intelligent people are getting fed up with how the system is making child abuse legal and acceptable, it appears the emotional and mental health of the child is of less concern than the right to personal pleasure of these trifling adults. This is psychological abuse and leads to no good turn of events.

the picture below is a picture of Tangela Washington’s “husband” as a child with her mother. How wicked this world is….

We live in an upside down world, where according to ancient Kimityu mythology, amenta is the heavenly state we strive to attain. And to be upside down in amenta is to be in an unnatural state, that strives against natures law.

In the 21st century, this is the look modern fashion  for the male.

He not only shares cosmetic space with the female, who is sharing jock strap with him, but he is also sharing her panties.

Here is one conscious sister, who didn’t fall for the homosexual infectious disease, that is afflicting us. Listen to what she says about this foul shit, that kneegrows are encourage to embrace in this “brave new world”! 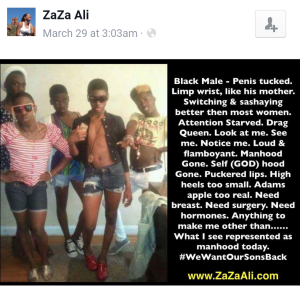 I want to conclude this post with this short clip where ex-Mrs amurdikkka, Vanessa Williams give a brief description of the kind of foul shit our children face daily, away from our eyes. What they don’t need is our own foulness, further corrupting their lives.