The various parties in the negotiations that led to Zimbabwe’s independence imposed the Politics of Reconciliation on the African population. It was a project conceived and developed at the level of the elite. There was no society-wide debate or involvement. Victims and survivors were not consulted, but rather watched powerlessly as many perpetrators of human rights violations went unpunished and even took on key roles within the Zimbabwean Army and secret services. As a consequence the need to forgive and forget was not internalized by the general public. Such unaddressed resentment explains in part why Mugabe’s actual “economic revolution”, aimed primarily at taking over white commercial farms, attracts a popular following. Imposed reconciliation fed, rather than eased, the unresolved grudges.

The empire has no clothe

In 1963, controversies led to a split within Joshua Nkomo’s Zimbabwe African People’s Union (ZAPU), then the main movement. A rival group, the Zimbabwe African National Union (ZANU), was set up by Ndabaningi Sithole. Robert Mugabe became its leader in 1966. Initially the split was not based on ethnic or regional differences or composition, but gradually it became significantly tribal in nature because ZANU and ZAPU campaigned and recruited in different areas – ZAPU mainly in Matabeleland, ZANU in the Shona-populated areas.

The rift deepened into serious conflict between the armed wings of the two movements – the Zimbabwe People’s Revolutionary Army (ZIPRA) linked with ZAPU whilst the Zimbabwe African National Liberation Army (ZANLA) was the armed wing of ZANU. ZIPRA and ZANLA differed in outlook, training and ideology: the former was Russian-trained, the latter Chinese trained. Fighting between them occurred in training camps in Mozambique and Zambia, in certain combat zones and, shortly after independence, in the assembly points for former guerrillas.

The issue of land reform in Zimbabwe – giving the African population back the resources that were theirs before the Anglo-Saxon invader settlers came – had long between a topic of discussion, as the minority Anglo-Saxon population owned the vast majority of farm land through the traditional acquisition of theft, plunder and murder.   For the Anglo-Saxons owning the vast fertile land tracks are a crucial tool in the process of staying in power.  The Lancaster House Agreement had stipulated that land transfers would take place with adequate compensation, but as Zimbabwe became deeper involved in helping Congo (Zaire) with their own war, less money was available for compensation.  In 1998 the government began seizing white owned farms and compensating owners only for improvements made to the land, such as houses, but not for the land itself.  Land owners refused to move and this has resulted in some cases of violence where the homeowners were forcibly removed and murders have occurred to intimidate other landowners.

In 1997 much of the more fertile land remained under control of a few thousand descendents of the settler invaders. Throughout this period, the population of lower-class laborers within the manufactured land areas, or reserves increased. In 1998, international donor governments that had contributed to financing land reforms, held a conference on increased government enforced acquisition of land. These governments adopted a set of principles in order to guide “Phase II” of land reform in Zimbabwe. These principles included respect for the legal process, transparency, poverty reduction, consistency and ensuring affordability for acquisition and allocation of land grants.
It is interesting that the least democratic of entities -the Western /European governments- always seek to extract moral consent from the non Europeans, while never remembering their own moral failures as colonlonialists, enslavers and genocidal advocates of non Angl-Saxon and European entities.Subsequent to these proceedings, however, the relationship between the Zimbabwe government and donor governments faced instability, and Zimbabwe accused these governments of attempting to maintain the colonial distribution of wealth. For the next five years there was increased political and social tension in Zimbabwe over land-distribution and compensation.
In July 2000, President Mugabe stated that he would adopt a “fast-tracts” land reform process in Zimbabwe where a national committee, The National Land Identification Committee, would identify tracks of land for redistribution. This fast-tracts model consists of two approaches: model A1, to benefit 160,000 of the poor from the general landless population; and model A2 aimed at creating 51,000 black commercial farmers. The European countries and supporters of Zimbabwe Anglo farmers cried foul that this process has been an inefficient and inconsistent method of allocating land. Moreover, there were increasing European concerns that these methods were not monitored by the Anglo-Saxon dominated judicial system.
In December 2000, the Commercial Farmer’s Union(CFU) filed a suit in the Zimbabwe Supreme Court, challenging the legality of the current fast track land reform system. The CFU was successful in obtaining an order from the Court, barring land distribution under the fast-track method because the method was held to be unconstitutional. This interdict was overturned one year later after the government allegedly reformed its policies and procedures. During November 2001, CFU created the Zimbabwe Joint Resettlement Initiative(ZJRI) and proposed redistribution of land with assistance for newly resettled farmers. 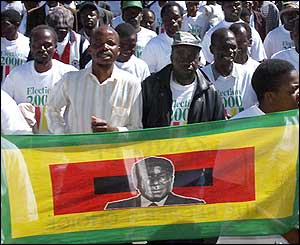 Zimbabwe’s economy has grown in fits and starts since 1980, but has on the whole been relatively stable. The economic depreciation since 2000 has been rapid and has been accelerating. The sanctions currently in place against Zimbabwe are very subtle and indirect, yet devastatingly effective in bringing Zimbabwe’s economy to its knees. In 2001 the United States of America promulgated a law called the Zimbabwe Democracy and Economic Recovery Act (ZIDERA hereafter). That enactment empowered the US President to instruct US representatives on the multilateral lending agencies – such as the IMF, World Bank and Africa Development Bank, among others – to vote against credit facilities (in all their various forms) to Zimbabwe, until the latter improves its human rights record, observance of the rule of law, holds free and fair elections etc.  ZIDERA thus introduces economic sanctions against Zimbabwe.

The US influence over the IMF, World Bank and Africa Development Bank, among others, is immense because of the size of its shareholding, vote and major donor status, respectively. There are many scholars that have criticised these institutions for being conduits used by the US for its international foreign policy.

Without saying it is imposing economic sanctions, the ZIDERA enactment allows the US to prevent Zimbabwe from accessing finance from certain multilateral lending institutions.  This is politicking of a different bent, because declaring a US imposed sanctions on an impoverished developing African nation would be bad public relations. As one Internet poster asked: why Zimbabwe? Why not the Middle Eastern countries where women are not allowed to vote, where there is no freedom of speech, where there is torture, etc? Why not countries like Pakistan where the current President came to power through a coup? Why not Egypt where presidential elections are predetermined? Why not Uganda where there is no multiparty politics? Why not Ethiopia where elections are rigged, students detained indefinitely, where torture is rife, etc? Why not China, or Libya – the two countries currently doing roaring trade with the US and EU among others, though there is no democracy, or basic human rights observance?

From the date of its imposition, any Zimbabwe foreign currency loan application made to the IMF, World Bank, the Africa Development Bank, among others, stood to be trashed by the US, directly through its vote, or indirectly through its influence within the institutions. On the international credit markets, with its junk investment status, Zimbabwe became an untouchable, because of its loan defaults and also because of the natural consequences following the institution of ZIDERA.

It also meant that any loan application made by Zimbabwe to any multilateral or bilateral international lending agency would carry an exorbitantly high cost, if they were willing to do business at all. This economic cost is too great for most countries much less Zimbabwe. The US position, expressed through ZIDERA meant that Zimbabwe would be unable to reschedule repayments of its debts due to the multilateral lending agencies. Practically speaking, debts became due and payable. And this explains why Zimbabwe paid £120 million to the IMF, and could not reschedule its IMF debt. That is a significant cost.

Because of US and EU foreign policy, none of Zimbabwe’s international debts have been cancelled, as have those of other countries. There have been asset freezes by the EU, and it is reported that the US will also impose an asset freeze in the near future on people or companies associated with ZANU PF. Companies, whether ZANU PF associated or not, contribute to Zimbabwe’s GDP, its economic and industrial development and alleviate unemployment. The economic and social cost to Zimbabwe of these asset freezes is real.

In the absence of ZIDERA Zimbabwe would have been able to negotiate with the IMF with a view to reschedule or cancel its debt payment, or apply for more finance. On travel sanctions,  prohibiting the Reserve Bank of Zimbabwe Governor from travelling to Australia, New Zealand and other countries to enter into business discussions with Zimbabweans in the Diaspora also has a negative economic impact on Zimbabwe. Zimbabwe’s economic problem is mainly manifested through a critical foreign currency crisis.

On top of that and to further destabilize the country, the MDC whose claim against the government is not without merit and whose fight for a more open and and transparent rule has incurred  the wrath of Mugabe. From this Pan Africanist corner the fight for a benevolent rule becomes tainted when you invite your traditional colonial murderers to support your effort to overthrow a difficult government, traditional murderers who have placed sanctions on your government, but in reality will primarily affect the very same people who support you. This is the problem I have with these emerging African governments, who invite their oppressors to mediate your in house fighting. As the proverb goes, when brothers fight the vultures pick up the spoils.
In the last couple of days we have seen they turmoil in Zimbabwe.  We who are aware can point to the issues that brought President Mugabe into power and how Zimbabwe has descended into the state it is now. We are aware of how the White Supremacy network has sponsored discord and unrest in emerging countries, especially where there is a preponderance of African people.
Zimbabwe is the latest in a series of attacks on African peoples sensibility, using the guise of democracy as a ruse to prevent African people from being truly independent.  Robert Mugabe is not the real problem with Zimbabwe, but he is a convenient excuse.